“Children take ownership of these shows & build them into their play and their culture. We would love to bring these shows to engage with your audiences. ”

On 15th January 2019, Virginia was part of a Scottish Children’s Theatre delegation to the IPAY International Showcase. International Performing Arts for Youth (IPAY) brings together specialist children’s theatre companies and venues from around the world.

Licketyspit was supported by Imaginate and Creative Scotland to participate in the conference and explore possibilities for touring our shows in America.

Our featured show was Hare & Tortoise, Virginia Radcliffe and Deborah Arnott’s fantastic adaptation of Aesop’s fable. Featuring the Bun Brothers, Mrs Doodah and the Spooky Wood! With original music by Tim Brinkhurst and unforgettable songs by Virginia and Deborah, Hare & Tortoise is a universally loved show for the whole family.

Below is what Virginia said, and the accompanying slide show…

Licketyspit was founded in 2004 out of my work over the previous three-years leading Scotland’s first dedicated early years theatre project. We develop our work through playing and talkingwith 3-7 year olds. We perform to 0-12s and adults making early years children the focus of a gregarious inclusive audience. Licketyspit currently has a repertoire of 7 original children’s plays: 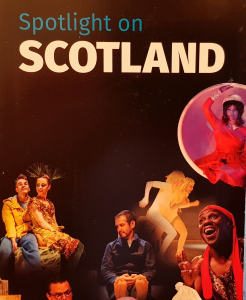 Molly Whuppie–is a 300 year old story about a Scottish super-hero girl, a King and a giant.

Wee Witches–is a funny and powerful story about generosity & persecution

Heelie-go-Leerie–is a play about the infinite possibilities of children’s play and
about climate change.

Hare & Tortoise is an adaptation of Aesop’s fable featuring Mrs Doodah the Washer-woman
and the garrulous Brothers Bun.

Licketyspit shows are full of life and language, music and dance with a joie de vivre which embraces engagement and the child’s impulse to play. As an artist I am fascinated by the connection between actors and children as play experts! Our players play with their audiences, revelling in dynamic physicality, songs, rhymes and games to tell stories which are moral, inclusive and exuberant. Stories which aren’t afraid to present dilemmas and challenges for young audiences in ways which are accessible for all. Licketyspit’s work draws strongly on Scottish culture and on multi-culturalism.

Our shows are enjoyed by Scots & non-Scots alike. Language is no barrier. Our shows are equally enjoyed by children with little or no English and additional support needs.In the last ten years Licketyspit has developed a series of innovative Instrumental Art projects alongside our shows, funded by schools, local and national government because of their impact on child development and family resilience -such as our immersive theatre project, LicketyLeap.