Skip to content
Home/Castlemilk, Happening Now, Happening Now Fam, hubs/Eyes, Musical Statues and Tag! What fun we had!
The children of Castlemilk Porridge & Play teach us their favourite games!

Eyes, Musical Statues and Tag! What fun we had!

Porridge & Play Castlemilk is back! Find out what the Castlemilk group get up to in their Porridge & Play Hub adventures each week! Block 3 is all about YOU! We are getting ready to make our AllScot Playcards which will be inspired by all your games and Stories. The AllScot Playcards will be on display at our Storyplay Festival which will be happening on Saturday September 17th!

Blog posts are written by Sarah!

We enjoyed playing As Big As A House at Porridge & Play Castlemilk today and our Storyplay Champion Michelle said she really liked it! We also discovered that everyone had some fabulous new dance moves in Andre’sDance Warm–up and it felt amazing to give our bodies a good stretch!

We were so lucky to find lots of new games as it was the children’s turn to teach us! We were all very excited to play Khadar and Yahey’s ‘Monster’ game, which involved everyone finding a place to hide so they don’t get caught by the monster.

Hadir showed us a great circle game called ‘Balls’ where the same amount of balls as participants are placed in the centre on a plate and they all have a number. One by one, each person runs in and shakes the plate of balls, then takes the one that is closest to the edge of the plate and once they are all gone, the person with the highest number wins!

Arwa also explained her game ‘Eyes’, very confidently to us and it was a little like Wink Murder, but with a new twist! This involved bits of paper again, you set them in the middle and all the people playing get a bit. If your paper has ‘eyes’ written on it then you’re the ‘murderer’. If the ‘murderer’ winks at you, you have to fall down in the circle. This keeps going until everyone has fallen or the ‘murderer’ is caught!

Freya had a huge list of games, some we knew, but some we didn’t. She told us how to play ‘Musical Statues’ which was quite a challenge, trying to say super still without even moving your eyes! Some games we’ve still to play, such as ‘3 Marker Challenge’ – A game where you get three crayons and a bit of paper and you have to draw a picture in under 5 minutes with just those colours!

If only we had all the time in the world, we could have kept playing for hours! As if the afternoon wasn’t already exciting, Abu got us all running around playing his game of ‘Tag’ and also suggested ‘Zombie Tig’. We were pretty hungry after all that running around so it was lovely to sit down and eat our picnic. Big shout out to the boiled eggs, which were very popular!

Pemi, Abu Freya and Amira said they all liked to play ‘Hide & Seek’ and Kevin sang the ABC song in a beautiful voice which was so amazing because he knew all the words and it was so lovely to hear. By the end of the day, we just had so many great ideas for new games to play!

We definitely saw this afternoon that children truly are the experts in play! 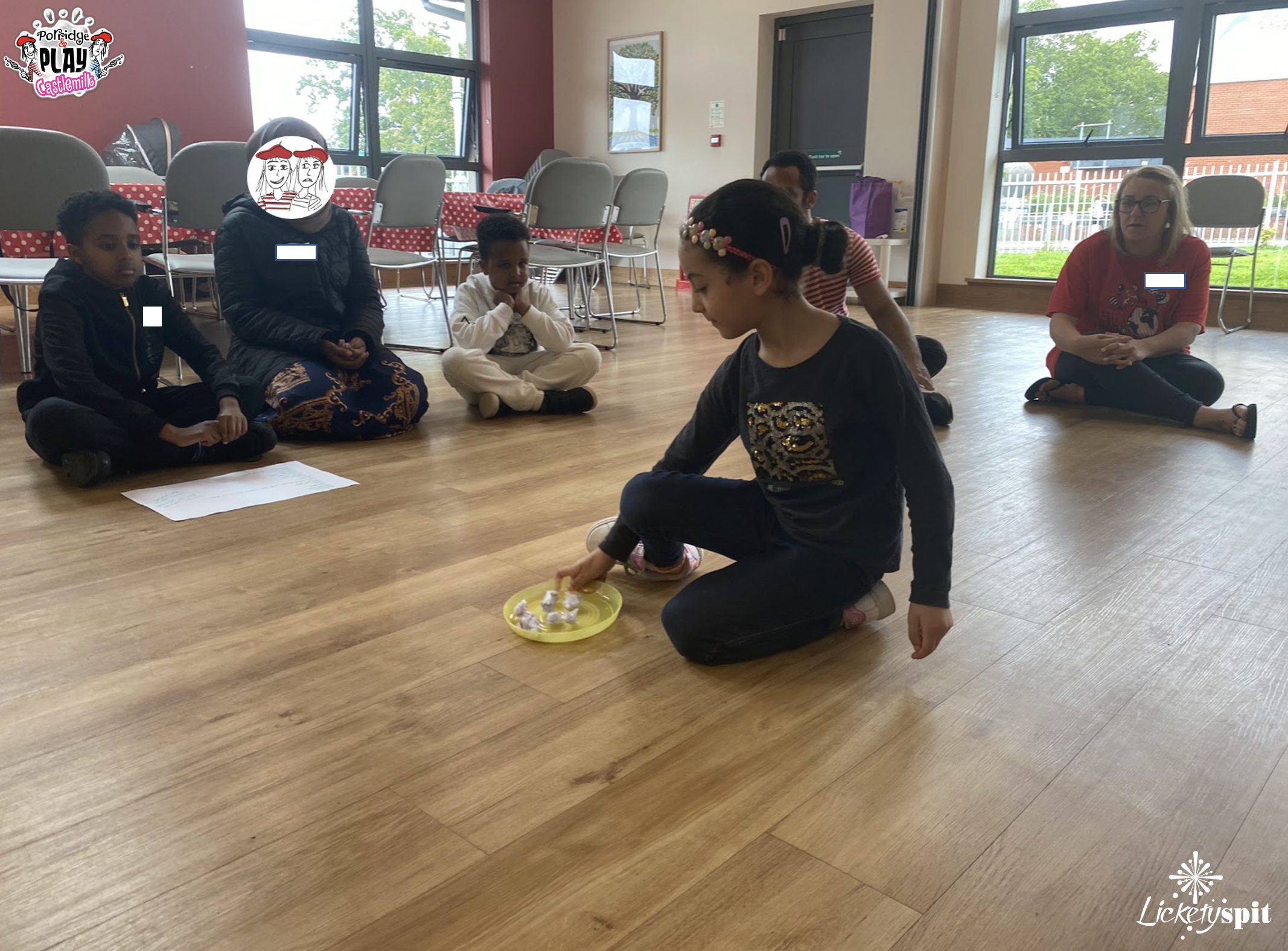 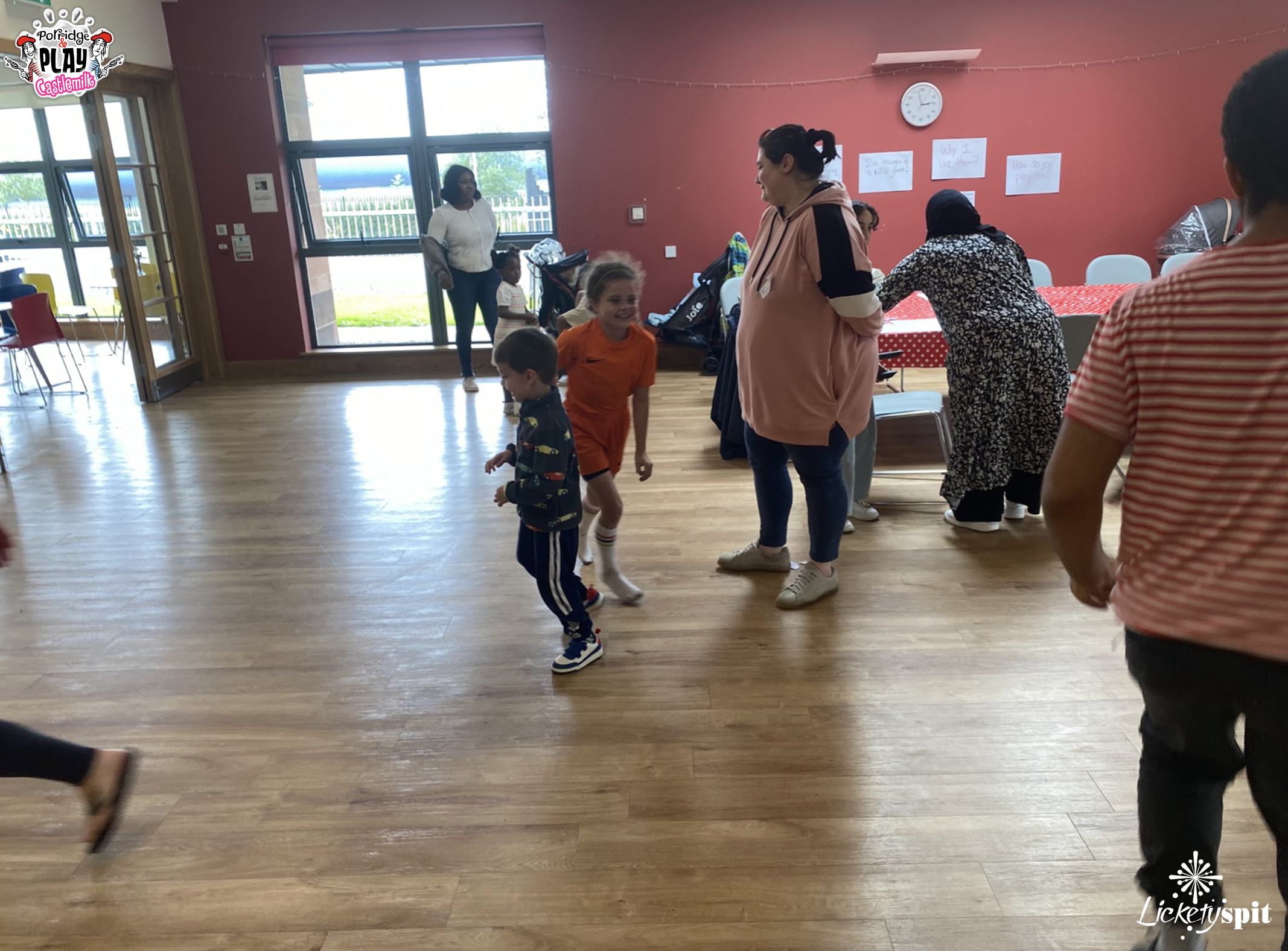 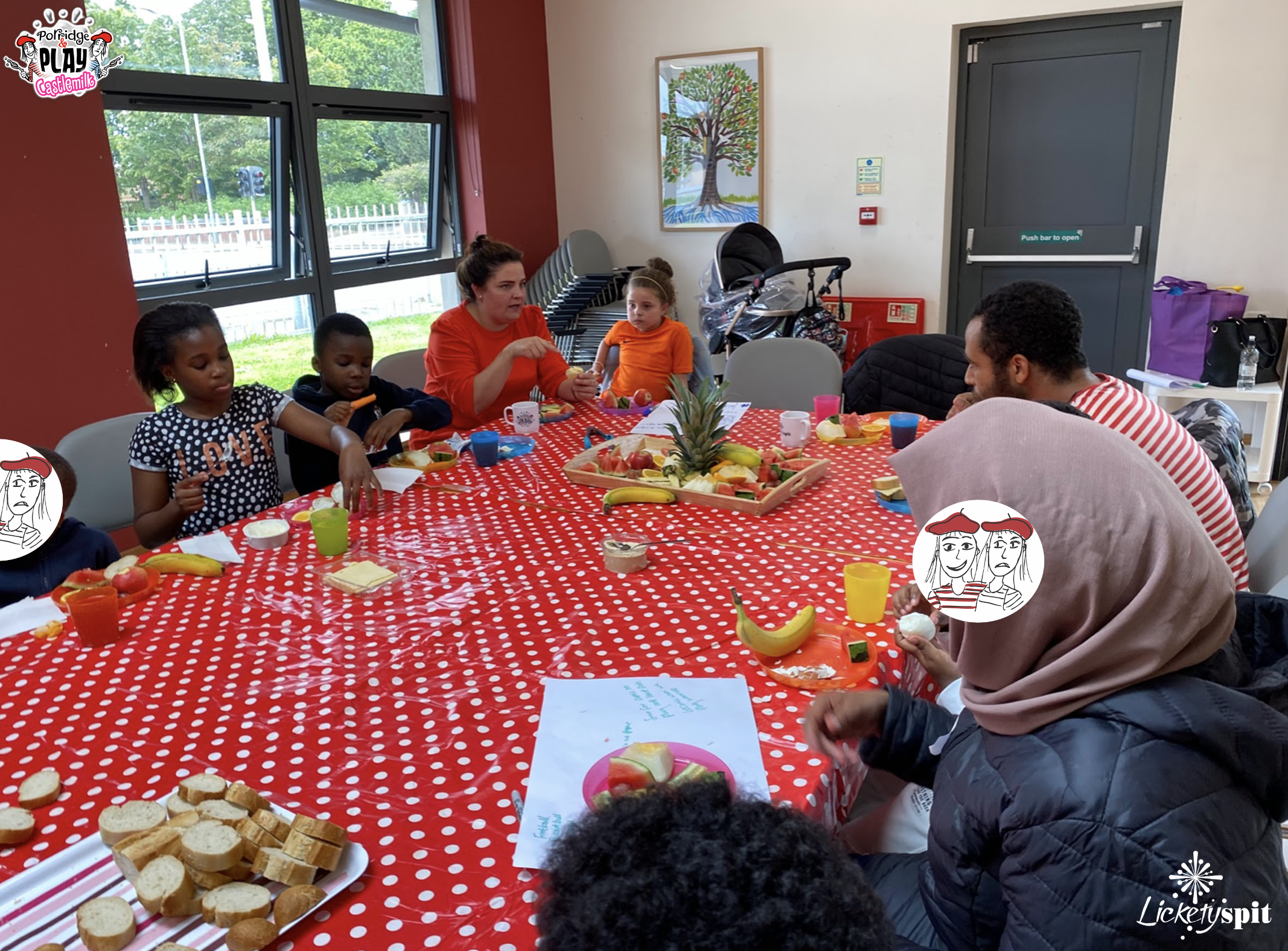 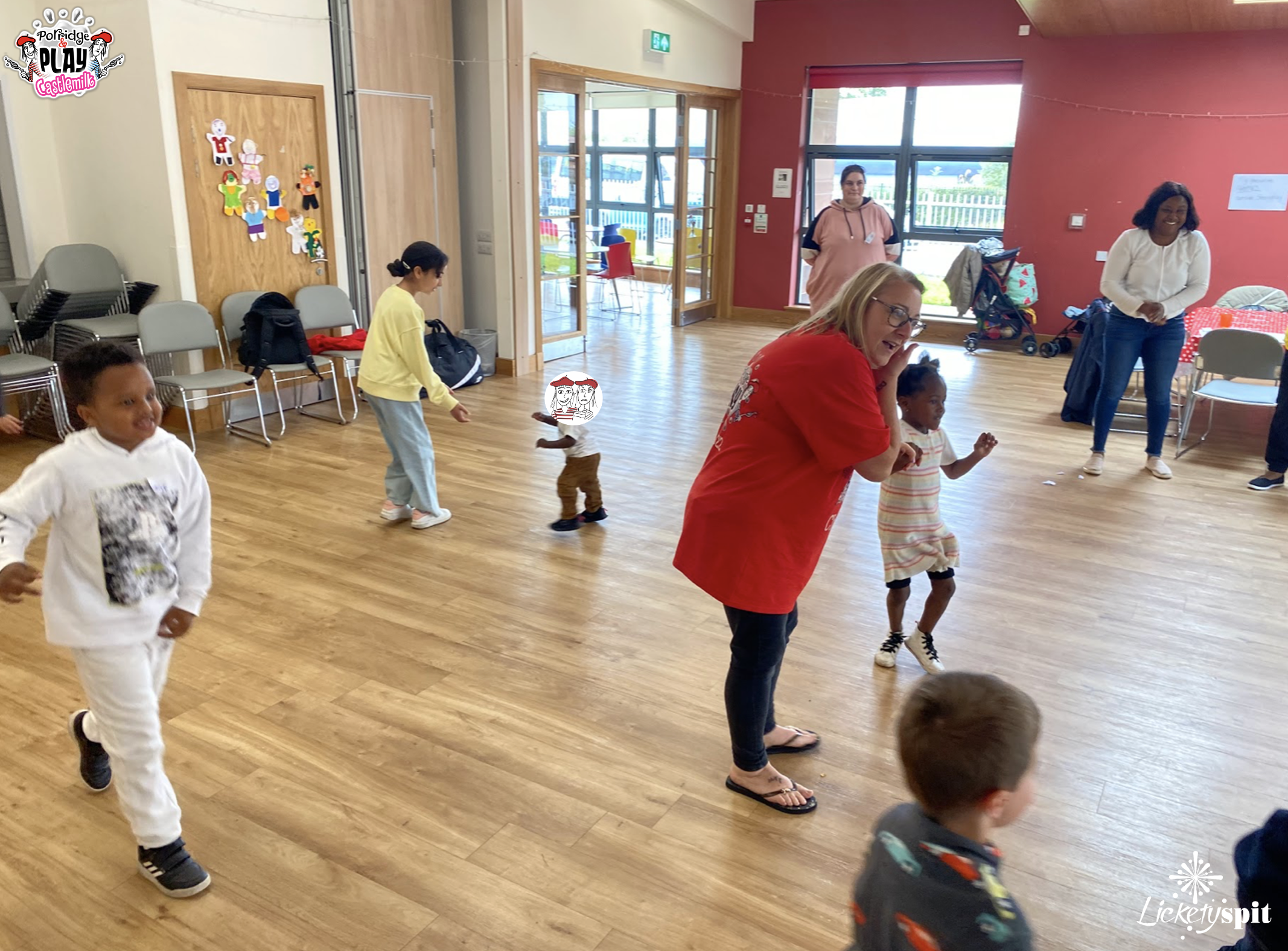 Porridge & Play Castlemilk is a New Scots Integration Project by Licketyspit, in collaboration with Indigo Childcare. 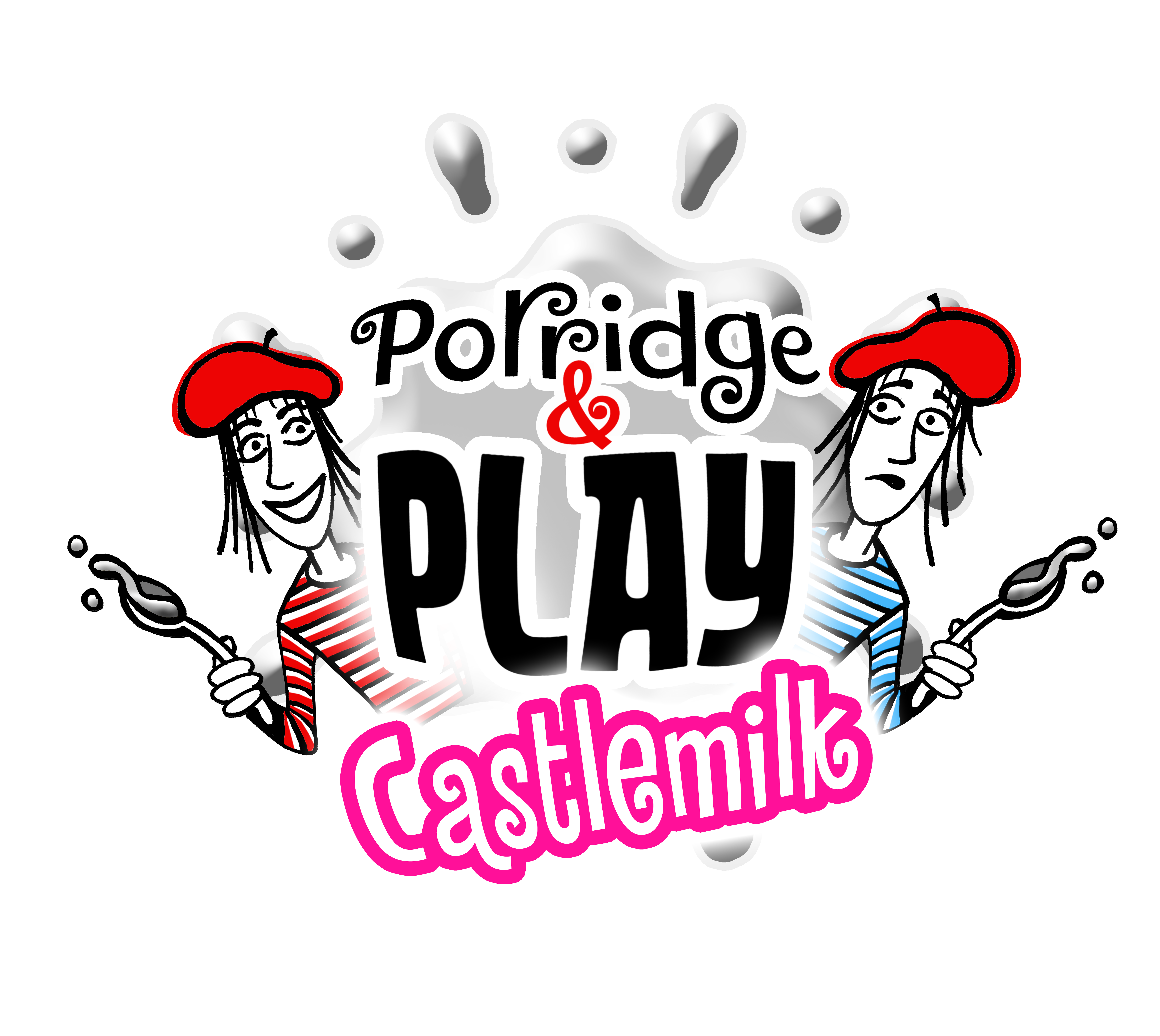 What is happening in block 3 for Porridge & Play Castlemilk?

After such exciting trips out we are venturing back to our hub this July and August and will be coming together to create our new AllScot Playcards!

These Playcards will already be like the existing Licketyspit ones, but will be created with the games you play and played as children, and new ones we make up together! You’ll be able to see them – and play them –  at our Storyplay Festival on Saturday 17th September! 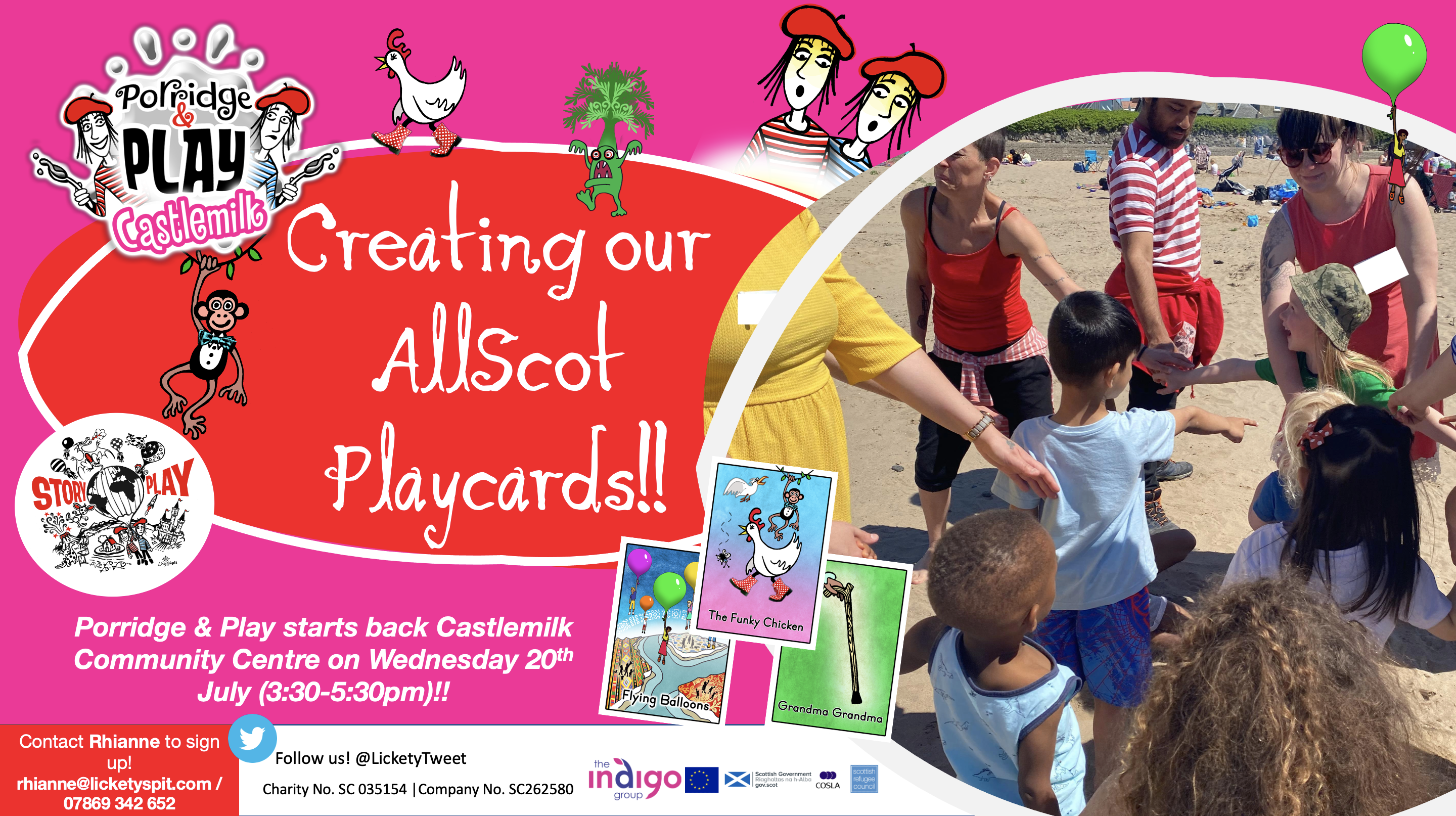